« The WAGER, Vol. 27(2) - Emotion regulation and impulsivity among people with Gambling Disorder: How does game preference matter? | Main | ASHES, Vol. 18(3) - Lack of evidence for the impact of minority stress on cigarette use among gay and bisexual Chinese men »

The DRAM, Vol. 18(3) - I’m in that class too: A Latent Class Analysis of college students’ drinking game consequences

The harmful public health impacts of college drinking have been well documented. Drinking games, which can increase the risk of drinking-related harms through rapid consumption of alcohol, are popular on college campuses. It is important for us to better understand the relationship between drinking games and drinking-related consequences so we can better tailor public health messaging to meet student’s needs. This week, The DRAM reviews a study by Dennis Hoyer and Christopher Correia that examined whether distinct groups of drinkers could be identified based on the consequences of their participation in drinking games.

What was the research question?
Can different groups of drinkers be identified by their drinking game consequences?

Multiple variables were associated with class membership. For example, drinking for social enhancement or thrills was associated with membership in Classes 1 or 2, versus Class 3. Class 1 was also the most likely to report drinking to cope. 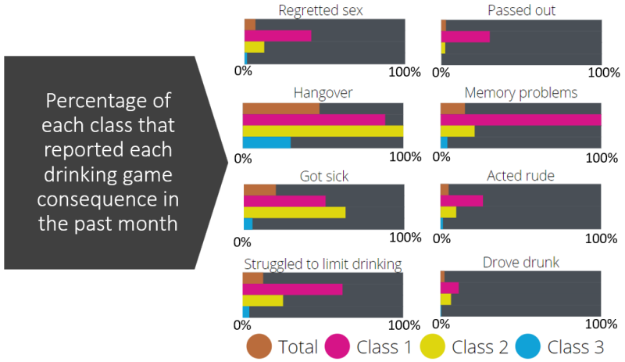 Figure. Prevalence of different drinking game consequences between classes and for the total sample. Click image to enlarge.

Why do these findings matter?
These findings show that while the majority of individuals who play drinking games only suffer a hangover the next day, a minority tend to face severe consequences from their drinking. Knowing this will help improve programs such as injunctive norm interventions by informing clinicians how often these consequences occur–information that therapists can pass on to clients who might be overestimating how common these consequences are.

Every study has limitations. What are the limitations in this study?
Most (95%) of the participants in this study were white and 75% were female, which may limit generalizability to the general population as both gender and ethnicity have been shown to be important factors in predicting alcohol use. Additionally, the study was limited to college students at a single university.

For more information:
University students worried about their drinking can typically find support on campus, and the NIAAA College Alcohol Policies Directory may be helpful in identifying these support resources. Individuals who may be worried their drinking is harmful can learn more at the National Institute on Alcohol Abuse and Alcoholism. Additional resources can be found at the BASIS Addiction Resources page.

Posted at 11:30 AM in The Drinking Report for Addiction Medicine (DRAM) | Permalink