The WAGER, Vol. 27(3) - Reddit and the NFL: What can an online support community for problem gambling tell us about the impact of sports betting legalization?

What was the research question?
How did the volume and content of an online mutual support community for problem gambling change after the repeal of PASPA and subsequent expansion of legalized sports betting?

What did the researchers do?
The researchers collected posts from the r/problemgambling subreddit (a message board on reddit.com) from January 1, 2016 to December 31, 2020. Using interrupted time series analysis, they compared the number of posts per week before, during, and after June 1, 2018 (the first day that states other than Nevada were able to initiate legal sports betting programs).

The researchers also analyzed 558 original posts from 75 unique, randomly-selected days and all 17,041 post titles from the study period. They used thematic analysis to examine the content of the selected posts and the post titles for common themes.

After June 1, 2018, it also became more common for posts to mention American major league sports, such as Major League Baseball (MLB), National Basketball Association (NBA), and especially the National Football League (NFL). During 2019 and 2020, posts were more likely to encourage sobriety or express worry about abstinence from gambling as the start of the NFL season approached and as the Super Bowl date neared. 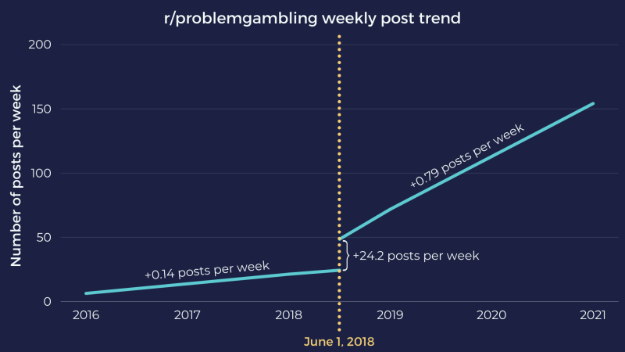 Figure. Average increase in posts per week on the r/problemgambling subreddit from January 1, 2016 through December 31, 2020. Click image to enlarge.

Why do these findings matter?
The rise in number of posts and references to American major league sports indicate an increased need for treatment and support of people experiencing gambling harm, especially during the NFL season. Online mutual support communities might also be an effective way to encourage formal treatment as an option and provide relapse prevention strategies. However, people who are concerned about their gambling should also consider seeking professional help from clinicians or using evidence-based self-help resources, as some research has identified potential risks of help seeking in online communities, such as misinformation or triggering content.

Every study has limitations. What are the limitations in this study?
Most posts did not mention a specific form of gambling, so it cannot be determined whether the increase in post activity was due to greater exposure to or experience with sports betting. Reddit users tend to be younger and predominantly male, and only about half of them are based in the United States, so the study might not be representative of the United States population. As a result, the findings may also not be generalizable to people outside of the Reddit online community.

For more information:
Do you think you or someone you know has a gambling problem? Visit the National Council on Problem Gambling for screening tools and resources. For additional resources, including gambling and self-help tools, please visit our Addiction Resources page.

Posted at 09:20 AM in The Worldwide Addiction Gambling Education Report (The WAGER) | Permalink