Despite smoking in the U.S. declining in the previous decades, a new epidemic has taken root. Specific e-cigarettes brands, such as JUUL, have become increasingly popular among youth, with many users unaware of the addictive levels of nicotine in these devices. Alarmingly, while e-cigarettes are often touted as a means to quit smoking, most first-time JUUL users do not report previous nicotine use. As e-cigarettes continue to rise in popularity, researchers and public health experts need to learn more about health consequences. Therefore this week, ASHES reviews a study by Afton Kechter and colleagues about the severity of nicotine dependence among JUUL and combustible cigarette users.

What was the research question?
How do nicotine dependence symptoms manifest in JUUL users, and do they differ between JUUL users and combustible cigarette users?

What did the researchers do?
The researchers used data from Monitoring the Future, a nationally representative survey of 8th, 10th, and 12th grade students. Participants who endorsed past-month vape use reported how many days in the past month they used a JUUL device. Similarly, participants who reported past-month cigarette use reported how many cigarettes they smoked on smoking days during that period. They completed a version of the Hooked on Nicotine Checklist, one for smokers and one for JUULers, which assesses dependency symptoms. In addition to comparing the prevalence of dependency symptoms among JUUL and cigarette users, the researchers also used logistic and negative binomial regression to assess the risk factors for having any dependence and dependence severity, respectively, among JUUL users.

What did they find?
About four in ten (41.3%) JUUL users screened positive for nicotine dependence compared to just over half (52.1%) of cigarette users. The most commonly reported dependency symptoms among JUUL users were cravings and feelings of being addicted, whereas for combustible cigarette users, the most common symptoms were cravings and feeling a strong need to use (see Figure). Demographically, JUUL users were more likely to be younger, female, and live in a large city. The number of non-nicotine substances an individual used was another risk factor for JUUL dependence. More frequent JUUL use was also associated with (1) having any dependency symptoms and (2) more dependency symptoms. 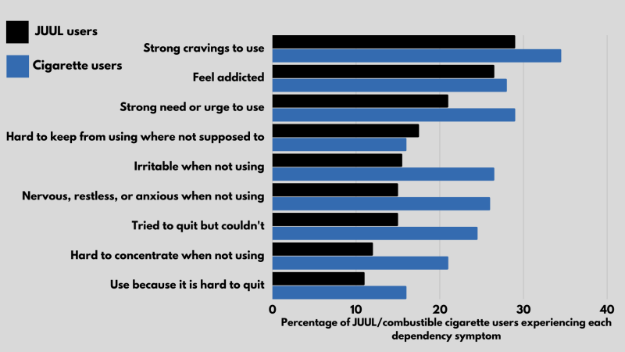 Figure. Percentage of JUUL and combustible cigarette users who reported each dependency symptom listed in the Hooked on Nicotine Checklist. Click image to enlarge.

Why do these findings matter?
While some argue that e-cigarettes are an aid in smoking cessation, this study found similar rates of nicotine dependence between users of e-cigarettes and traditional smokers. The fact that a substantial minority of JUUL users screened positive for nicotine dependence suggests that more prevention programs and interventions are needed. The findings also point to the potential need for targeted interventions for e-cigarette users, as it found demographic differences in JUUL use, namely among younger urban females.

Every study has limitations. What are the limitations in this study?
JUUL use frequency and cigarette use frequency were defined differently, which may lead to inaccurate comparisons of dependence. The study also failed to provide a timeframe for participants reporting nicotine dependency symptoms, so non-current symptoms may have been reported.

For more information:
Individuals who want to stop using nicotine products may find guidance on the CDC website. The Truth Initiative can provide more information on the dangers of vaping. Additional resources can be found at the BASIS Addiction Resources page.