« The WAGER, Vol. 27(5) - Gambling on the stock market?: Examining associations between stock trading and problem gambling behavior | Main | ASHES, Vol. 18(6) - Cannabis or tobacco: Which type of smoking is more common in homes? »

Alcoholics Anonymous (AA) is the most widely available and used mutual-help program for individuals with alcohol use disorder (AUD) in the United States. AA is effective at addressing alcohol-related problems and AUD in the general population, performing as well or better than other treatment modalities, like cognitive behavioral therapy, on alcohol-related outcomes. However, little is known about whether people who identify as bisexual or gay/lesbian engage with AA to the same extent as heterosexuals. This week, as we approach Pride Month, the DRAM reviews a study by Briana L. McGeough and colleagues that examined rates and predictors of AA attendance across sexual orientations.

What did the researchers do?
The researchers pooled data from five waves of the nationally-representative National Alcohol Survey (1995-2015) conducted with U.S. adults every five years. The sample included 7,862 respondents who endorsed at least one lifetime symptom of AUD. Respondents reported their sexual orientation (heterosexual, bisexual, or gay/lesbian), demographic information, and whether they had ever gone to an AA meeting for their drinking (yes/no). Participants were assessed for lifetime AUD severity on a continuous scale from 0 to 11 based on the criteria for AUD. 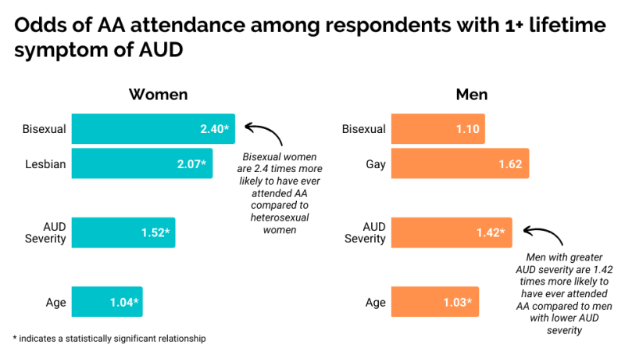 Why do these findings matter?
Sexual minority individuals are at higher risk for alcohol-related problems and AUD compared to their heterosexual counterparts. Findings from this study indicate that AA may serve as an appropriate resource for sexual minority individuals, particularly lesbian and bisexual women who are older, have less-severe AUD, and greater levels of religiosity. Other sexual minority men and women may also be well-served by AA, but may require additional supports. Providers should consider referring sexual minority clients struggling with their alcohol use to AA.

Every study has limitations. What are the limitations of this study?
This study only examined whether respondents ever attended an AA meeting. While sexual minorities may be more likely to initiate AA attendance, the findings cannot be used to determine continued engagement and involvement with AA over time. This study used binary gender classification and did not ask about gender identify, so results might not be applicable to non-binary and transgender individuals.

Posted at 12:10 PM in The Drinking Report for Addiction Medicine (DRAM) | Permalink