ASHES, Vol. 18(6) - Cannabis or tobacco: Which type of smoking is more common in homes?

Cannabis is one of the most commonly used drugs worldwide. Cannabis smoke produces heavy particulate matter emissions, which is linked to cardiovascular harm for both the smoker and also potentially for others around them who do not smoke. Though there are similar health risks, smoking cannabis is often seen as safer than smoking tobacco, and more people allow cannabis smoking in their homes. Understanding the rate of in-home cannabis smoking can help inform the need for public health educational campaigns. This week, ASHES reviews a study by John Bellettiere and colleagues that compared in-home cannabis and tobacco smoking among psychoactive drug users from 17 countries.

What was the research question?
Is in-home cannabis smoking more common than in-home tobacco smoking, and do rates vary between types of smokers?

What did the researchers do?
The study sample included 107,274 adults (globally defined; at least 16 years old) who took the 2019 Global Drug Survey (GDS) and reported past-year use of at least one psychoactive drug. The researchers asked respondents about in-home smoking,1 current cannabis use,2 and current tobacco use.3 Using predicted probabilities, the researchers compared in-home smoking rates across four groups: cannabis-only users, tobacco-only users, cannabis and tobacco users (dual users), and non-users. 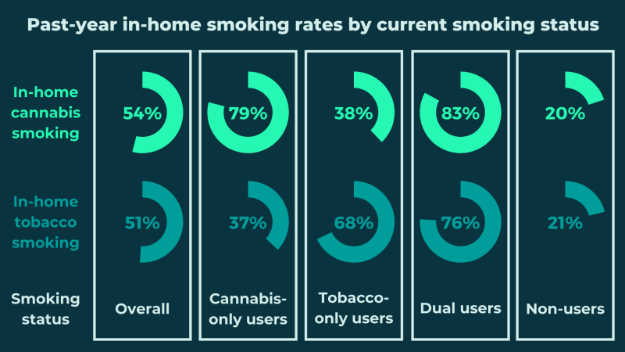 Figure. Percent of respondents (i.e., predicted probabilities) that reported smoking occurring in their homes during the past year, by current smoking status. Adjusted for age, sex, and country. Click image to enlarge.

Every study has limitations. What are the limitations in this study?
The findings are likely not generalizable to the global adult population as the study only included adults from 17 countries who reported using at least one psychoactive drug. The study also relied on self-reports of past-month and past-year occurrences, so response biases such as social desirability and recall bias may have influenced the results.

[1] In-home smoking was defined as any smoking in the participant’s home, either by the participant or anyone else, in the past year. Participants were told not to include vaping or e-cigarette use.

[2] Current cannabis use was defined as any past-month use of cannabis products containing tetrahydrocannabinol (THC).

[3] Current tobacco use was defined as any past-month use of cigarettes, shisha/hookah, or tobacco mixed with cannabis.