« The WAGER, Vol. 27(7) - Internet gaming addiction and game genre among Korean adolescents | Main | ASHES, Vol. 18(8) - Any amount of cigarette smoking 3 months before and during pregnancy can lead to birth defects in infants »

The DRAM, Vol. 18(8) - A pathway from socioeconomic deprivation to alcohol dependence

Many countries are currently facing an equity crisis as income inequality has grown in recent decades. This is especially alarming, given that socioeconomic status is predictive of poor health outcomes including depression, sleep quality, and even mortality. There are also connections between socioeconomic status and drinking behaviors and outcomes. Understanding this relationship is an important step towards developing stronger and more effective intervention plans. This week, The DRAM reviews a study by Ruichong Shuai and colleagues that examined an indirect pathway from socioeconomic deprivation to alcohol dependence. This mediational pathway involves aversive experiences, symptom internalization, and drinking as a coping mechanism.

What was the research question?
Are there observable pathways from poor socioeconomic status to alcohol dependence?

What did the researchers do?
The research team recruited 512 participants using a psychology study pool and social media ads. Participants completed a battery of assessments covering five concepts the research team hypothesized were part of the mediational pathway. These concepts were socioeconomic deprivation, aversive experiences, symptom internalization (i.e., experiencing depression/anxiety), drinking as a coping mechanism, and finally susceptibility to alcohol dependence. The research team restricted the sample to include only the 219 participants who were between ages 18 and 25 and reported hazardous drinking in the past year, to ensure the data met the assumptions behind the multiple regression models they used.

What did they find?
Notably, the research team did not find a direct relationship between socioeconomic deprivation and alcohol dependence. However, they did find an indirect path through the three intervening variables: aversive experiences, symptom internalization, and drinking as a coping mechanism (see Figure). Put another way, those who were socioeconomically deprived were at higher risk for painful experiences, which were linked to depression and anxiety, which were in turn linked to drinking to cope, and finally to alcohol dependence. Each variable was most strongly associated with the next one in the sequence, further supporting the validity of this temporal model. 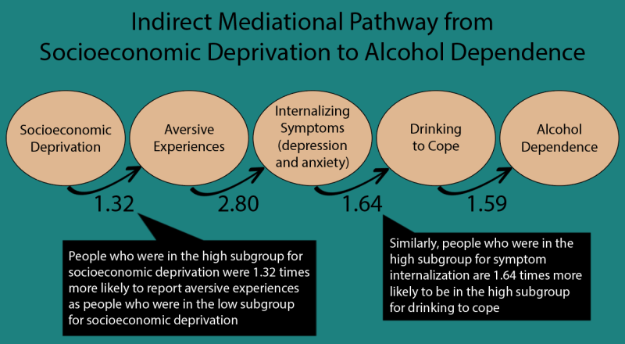 Why do these findings matter?
These findings show the importance of a holistic approach to addiction treatment. Alcohol dependence does not manifest in a vacuum. Rather, there are several points at which health professionals can intervene to prevent the development of drinking-related problems. These findings also provide more insight into the alcohol-harm paradox, the tendency for socioeconomically deprived people to experience greater harm from alcohol than wealthier people despite the fact that they do not drink more. Perhaps the effects of chronic, toxic stress, due to aversive experiences and resulting mental suffering, lead to a weakened body that cannot respond as well to alcohol.

Every study has limitations. What are the limitations in this study?
The majority (86.3%) of this study’s participants were undergraduate women so these results may not be generalizable to the population as a whole. Additionally, while this study proposed a causal pathway, the study surveyed participants at a single time point and thus could not establish the sequence of events over time. Longitudinal studies can provide more evidence of causality.

For more information:
Individuals who are concerned about their drinking behavior may find support through Alcoholics Anonymous. Others who wish to learn more about alcohol dependence may benefit from the Cleveland Clinic’s educational resources. Additional resources can be found on the BASIS Addiction Resources page.

Posted at 10:25 AM in The Drinking Report for Addiction Medicine (DRAM) | Permalink