As Internet games have gained popularity, the industry has expanded with it and game genres are plentiful. Some Internet game players go beyond healthy limits, and Gaming Disorder is recognized in the International Classification of Diseases-11 as excessive gaming despite consequences and lack of control or ability to prioritize other activities over gaming. However, there are some indications that different game genres are differently associated with traits implicated in addiction. For instance, in one study, experience playing First-Person Shooter (FPS) games was positively correlated with impulsivity, but experience with strategy games was negatively correlated with impulsivity. This week, The WAGER reviews a study by Dongil Kim and colleagues that examined the association between Internet gaming addiction and game genre among adolescents.

What was the research question?
What is the relationship between Internet gaming consequences and adolescents’ primary game genres?

What did the researchers do?
This study used data from the 2017 National Youth Policy Institute of Korea Internet game usage survey conducted on adolescents. A total of 3,217 elementary and middle school students in grades 4-9 completed the survey using the Korean Maladaptive Game Use Scale, which provides a total score and scores for individual gaming consequences, such as neglecting regular life. The authors grouped participants into game genres (e.g., FPS, arcade/shooter, sports) according to the games they played the most. They used ANOVA and post-hoc analyses to examine the variation in addiction and personality characteristics based on game genres.

What did they find?
Not surprisingly, total Maladaptive Game Use Scale scores were higher among participants who gamed than those who did not (see Figure). Participants’ game genres were unrelated to the severity of most gaming consequences (excessive time spent, reputation damage, compulsive use, and continued use despite side effects). Game genres were associated with the remaining three consequences. Specifically, participants who played Real-Time Strategy (RTS) and FPS games reported higher levels of tolerance, withdrawal, and neglect of regular life compared to at least some of the other groups of participants. 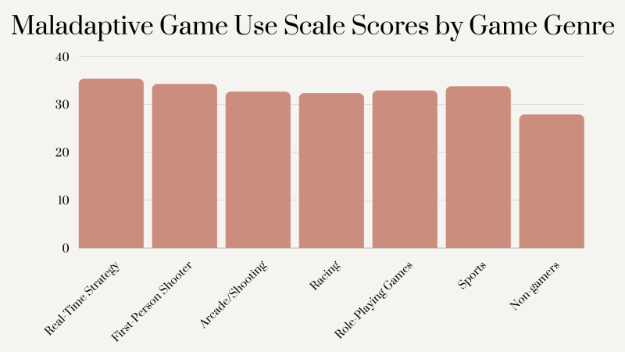 Why do these findings matter?
Different games have different achievements and social aspects, and the vivid nature of some games might also increase the immersion of the player into the character, as well as possible projection of the player onto the character. These features might make some games especially appealing to adolescents who are at-risk for gaming in a problematic way; they could also contribute to problematic gaming patterns. Much more research is needed to examine these possible links, as well as other characteristics that may better inform interventions.

Every study has limitations. What are the limitations of this study?
As this study examined adolescents in Korea, the results may not apply to adolescents in other countries. Of Korean adolescents, over 99% regularly use the Internet, almost 60% play computer games, and over 82% play smartphone games. This dominance of Internet usage along with other cultural factors can limit generalizability to countries with differing norms. Additionally, games that crossover game genres are appearing as games continue to diversify, so these categories might be blurring. The popularity of certain games during data collection might also impact the results of this study.

For more information:
Individuals who may be worried about their gaming may find support at The Massachusetts Council on Gaming and Health. If you are worried that you or someone you know is experiencing addiction, the SAMHSA National Helpline is a free treatment and information service available 24/7. For more details about addiction, visit our Addiction Resources page.

Posted at 09:25 AM in The Worldwide Addiction Gambling Education Report (The WAGER) | Permalink