Substance misuse can have negative health, economic, and social effects on communities. Law enforcement seizure data indicates that Vietnam is experiencing increased use of illicit drugs such as methamphetamine, heroin, ecstasy (MDMA), and ketamine. However, research on actual drug use is limited, as stigma related to drug use can discourage truthful answers on surveys. This week, STASH reviews a study by Tran Thi Thanh Hue and colleagues that used wastewater-based epidemiology to estimate the consumption levels of illicit drugs in a Vietnamese city.

What was the research question?
What are the consumption levels of illicit drugs in Hanoi, Vietnam?

What did the researchers do?
From 2018-2020, researchers collected 184 wastewater samples from a main sewage canal in Hanoi. The samples were filtered and analyzed via direct injection. Based on the amount of drug biomarkers detected in samples, researchers estimated drug consumption levels using a back-calculation method. To compare samples collected on different days, they used t-test and ANOVA analyses.

What did they find?
All samples contained biomarkers for methamphetamine, heroin, and ketamine, whereas the biomarkers for MDMA and cocaine were detected in more than 75% of samples. The average number of daily doses per 1,000 people ranged from 0.4 (cocaine) to 22.5 (methamphetamine), with heroin, ketamine, and MDMA at intermediate levels (see Figure). Put another way, this research indicates that 2.25% of Hanoi residents used one standard dose (15mg) of methamphetamine daily (though some may have used more and some may have used less). For all drugs, the estimated consumption levels did not differ between days of the week. 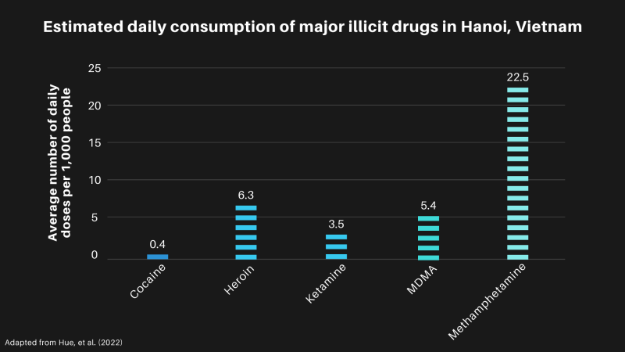 Why do these findings matter?
The lack of difference in estimated drug consumption levels between days of the week suggests that drug use occurs on a regular basis and is therefore an ongoing issue in Vietnam. Knowing which illicit drugs are used most can inform prevention efforts. The rising popularity of amphetamine-type stimulants (ATS) like methamphetamine indicates the need for new policies and interventions specifically for ATS misuse.

Every study has limitations. What are the limitations in this study?
Drug consumption levels were estimated based on the amount of drug biomarkers found in the samples, but the dose information of drugs can vary across regions and may be impacted by drug purity. Also, the analysis did not account for the breakdown of biomarkers while in the city’s sewage system, which may have led to an underestimation of drug use.

Posted at 09:10 AM in Science Threads on Addiction, Substance Use, and Health (STASH) | Permalink