The DRAM, Vol. 18(9) - To plan or not to plan: Motives and contexts for planned and unplanned drinking among college students

Drinking among college students remains a public health concern. Based on the 2019 (U.S.) National Survey on Drug Use and Health, over half of full-time college students reported drinking alcohol in the past month, while 33% reported binge drinking1 in the past month. However, alcohol can lead to many negative consequences for students such as poor academic performance, assaults, or even death. This week, The DRAM reviews a study by Angela Stevens and colleagues that explored college students’ motives, social contexts, and physical contexts for unplanned and planned drinking.

What was the research question?
How do motives, social contexts, and physical contexts relate to unplanned and planned drinking among college students?

What did the researchers do?
A total of 341 college students who use alcohol and cannabis completed 56 days of five daily surveys. These self-reported surveys included demographic information, unplanned and planned drinking, drinking motives, drinking contexts, alcohol consumption, and negative consequences. The researchers used generalized linear mixed-effects models to analyze links between the students’ responses. 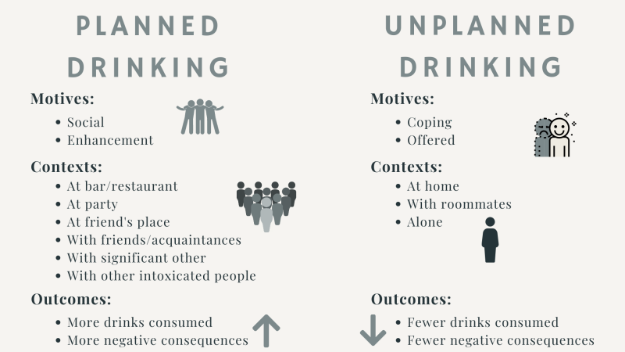 Figure. Motives, contexts, and negative consequences for planned and unplanned drinking at the daily level.

Every study has limitations. What are the limitations of this study?
This study may not be generalizable to college samples without cannabis use because all participants in this sample engaged in both alcohol and cannabis use. Also, results about planned and unplanned drinking may not be generalizable beyond college students to non-college adults of similar age. It is possible that the specifics of the college environment (e.g., motives for drinking, locations and social scenes, logistics for getting alcohol while in that age range) have an impact. Also, this study relies on participants recalling past information instead of real-time information, possibly leading to some self-report bias.

For more information:
Parents who want to discuss the dangers of drinking with their college students can find resources from NIAAA. Individuals who are concerned about their drinking behavior may find support through Alcoholics Anonymous. The National Institute on Alcohol Abuse and Alcoholism also has tips and resources for people struggling with problem drinking. For additional drinking self-help tools, please visit our Addiction Resources page.

Posted at 09:30 AM in The Drinking Report for Addiction Medicine (DRAM) | Permalink