« ASHES, Vol. 18(10) - Participant satisfaction with the “Power to Quit” smoking cessation program | Main | The WAGER, Vol. 27(10) - Skin in the game or skins on the game? Adolescent esports gambling and its relationship with problem gambling »

American Indian and Alaskan Native (AI/AN) populations are at high risk of suicide, especially when misusing opioids. However, receiving support from others may decrease the likelihood of a suicide attempt. This week, STASH reviews a study by Daniel Opoku Agyemang and colleagues that looked at how social support affects the relationship between opioid misuse and suicide attempts among AI/AN youth. For comparison purposes, the researchers examined how social support influenced suicide attempts among a variety of different groups defined by gender, sexual orientation, geography, and opioid use.

What was the research question?
How does social support influence the relationship between opioid misuse and suicide attempts?

What did the researchers do?
The researchers used six years of cross-sectional data from the New Mexico Youth Risk and Resiliency Survey (NM-YRRS), which is designed to be representative of students in grades 9-12. To answer the study’s primary research question, the authors examined questions from the NM-YRRS that asked participants whether they had attempted suicide in the last year, had ever used heroin, had misused prescription opioids in the past year, and a series of questions about how participants’ friends, family members, teachers, and other mentors supported them in different ways. By combining the questions about heroin use and prescription opioid misuse, the authors created a general measure of opioid misuse. The researchers classified participants as either rural or urban based on the population of the city in which their high school was located. They also stratified participants according to their sexual orientation, gender, and whether they lived on a reservation. In total, the study was based on the data of 19,067 AI/AN students. 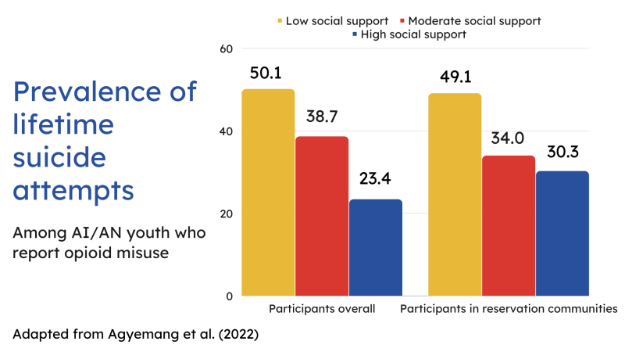 Why do these findings matter?
The study found that social support has a protective effect for AI/AN youth attending off-reservation schools, but not for youth attending schools in on-reservation, rural communities. This finding may be representative of a larger societal issue being that schools within AI/AN reservation communities are underfunded compared to other school districts. Students in chronically underfunded schools might experience a lack of social support, among other consequences. Going forward, there is a clear need to adequately fund AI/AN school systems. Opioid misuse was far more common among LGBTQ students compared to heterosexual students. LGBTQ youth in general are at an elevated risk of suicide, which, coupled with the relationship between suicidal ideation and opioid misuse, is highly concerning. Going forward, it may be beneficial to expand current substance use treatments to youth while addressing risk factors for opioid misuse among AI/AN youth. When doing so, health researchers and practitioners should be careful to ensure that programming efforts are culturally sensitive and appropriate.

Every study has limitations. What are the limitations of this study?
This study used data that was collected at a single time point, which means that the results of the study could not suggest that opioid misuse leads to suicide attempts, or that high social support prevents suicide attempts. The questions used in the study were also not specifically designed for AI/AN youth. This means that there could be cultural considerations (such as what social support means to someone who is AI/AN) that are not represented by the study’s questions.

For more information:
Do you think you or someone you know has suicidal thoughts or ideations? Please call the National Suicide Prevention Lifeline at 9-8-8. For additional resources, including opioid addiction and self-help tools, visit our Addiction Resources page.

Posted at 09:05 AM in Science Threads on Addiction, Substance Use, and Health (STASH) | Permalink