STASH, Vol. 18(11) – Anniversary reaction: Substance use and suicide in the wake of a parent’s death

Children who have lost a parent or other relative are at increased risk for psychological and behavioral health problems, including substance use disorder and suicide-related behavior. The anniversary of a loved one’s death can trigger intense feelings of grief, anger, depression, and despair that contribute to negative health outcomes, also known as the anniversary reaction. This week, STASH reviews a study by Ayako Hiyoshi and colleagues that examined whether the risk of substance use disorder and suicide-related behavior among children increases around the date of their parent’s death and subsequent anniversaries.

What was the research question?
Does the risk of substance use disorder and suicide-related behavior among children increase around the date of their parent’s death and subsequent anniversaries?

What did the researchers do?
The researchers conducted a register-based cohort study of Swedish children, examining their medical data from age 12 through 24 years old to see when diagnoses of substance use disorder or suicide-related behavior occurred in relation to the date of their parent’s death. The researchers then used survival analysis to estimate the risk of substance use disorder and suicide-related behavior among children who had experienced the death of a parent, compared to those who had not lost a parent, over time. 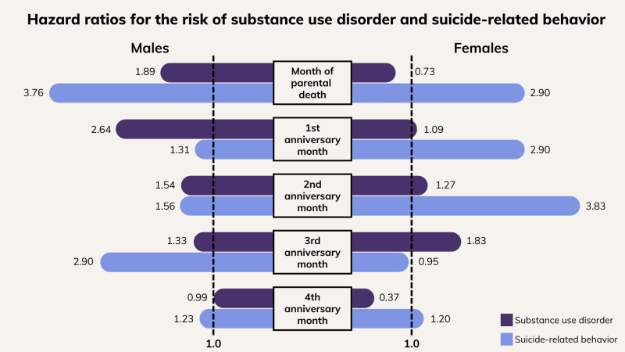 Why do these findings matter?
Losing a parent at a young age increases the risk of substance use disorder and suicide-related behavior, particularly during the first month after and near the anniversary of a parent’s death. Early initiation of substance use and adolescent suicide-related behavior can lead to future behavioral and mental health issues. Thus, the month of a parent’s death and subsequent anniversary months may be especially important times to provide extra support for children, such as support groups or camps that normalize the grieving process and help the child express feelings and learn healthier coping strategies.

Every study has limitations. What are the limitations in this study?
The sample was restricted to Swedish individuals between 12-24 years old, so the findings may not be generalizable to people outside of Sweden or in different age groups.

For more information:
Do you think you or someone you know has suicidal thoughts or ideations? Please call the National Suicide Prevention Lifeline at 9-8-8. If you are worried that you or someone you know is experiencing addiction, the SAMHSA National Helpline is a free treatment and information service available 24/7. For more details about addiction, visit our Addiction Resources page.

Posted at 09:20 AM in Science Threads on Addiction, Substance Use, and Health (STASH) | Permalink