Teen vaping remains a major public health problem in the United States. Many youth e-cigarette users have also never used e-cigarettes prior to this year, indicating that vaping continues to draw in new users. This is particularly alarming considering the recent connections between vaping and mental health issues among young adults, plus physical health effects of vaping such as lung disease and cancer. School-based smoking cessation programs could be a major step towards reducing youth vaping. This week, ASHES reviews a study by Krysten Bold and colleagues that examined high school students’ perceptions of what an effective youth e-cigarette cessation program needs.

What was the research question?
What sorts of things do youth want to see in a school-based e-cigarette cessation program?

What did the researchers do?
The researchers recruited 62 Connecticut high school students who indicated current or former e-cigarette use. The 62 participants were divided into eight focus groups. Six of these focus groups consisted of current vapers while the remaining two consisted of former vapers. The focus groups covered several topics related to vaping cessation programs, including the health effects of vaping; how to motivate youth to quit; and the preferred location, timing, and format of the intervention. Participants also rated which types of skills programs should teach, such as learning ways to deal with stress, how to relax, and how to deal with poor concentration/attention. These skills are often included in cognitive behavioral therapy (CBT), which is effective for smoking cessation and may hold promise for e-cigarette cessation as well.

What did they find?
The most common theme was that teens wanted to learn more about the health effects of vaping, including the effects of chemicals in e-cigarettes. Some also wanted visualizations of the damage to their lungs. Another point of consensus was timing — most wanted the program to be available during the school day rather than as an afterschool program. Similarly, there was a consensus that these programs should be marketed during the school day as part of routine announcements. In terms of the format, preferences varied, with some preferring one-on-one programs while others liked the idea of group support. A few even suggested school-wide assemblies. Most participants supported confidentiality from parents for fear of punishment, though others admitted that it would likely be beneficial to involve parents at some point. Additionally, some participants favored the use of professional counselors from outside the school to ensure confidentiality, while others supported the use of peer counselors who were more relatable. Finally, the participants showed a strong interest in learning several skills to help them quit vaping, particularly healthy ways of dealing with stress and learning to relax without resorting to vaping (see Figure). 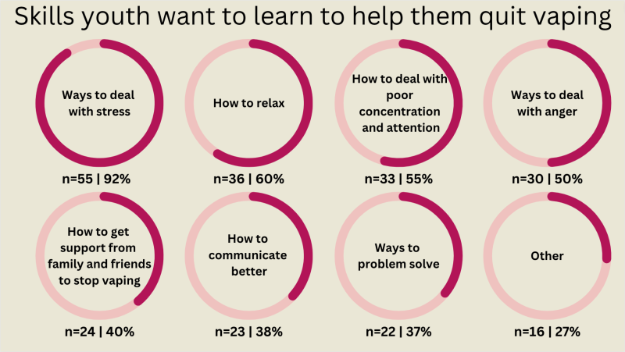 Why do these findings matter?
These findings can help prevention specialists craft more effective youth e-cigarette cessation programs. Educational programs should focus on health concerns including the effects of chemicals, perhaps including engaging visualizations. Additionally, interventions may want to focus on teaching youth the skills they were particularly interested in such as ways to deal with stress or relax. Finally, these results show the need to continue experimenting with different formats of e-cigarette cessation programs. While the youth came to a consensus on many of the topics, other topics showed a large variety in preferences such as the format of the program. Offering a variety of formats may improve treatment initiation/retention.

Every study has limitations. What are the limitations in this study?
This study was limited to two Connecticut high schools so results may not be generalizable to youth as a whole. On top of this, many of the topics–such as which skills are important for e-cigarette cessation–were generated based on the literature, prior to speaking with youth. Therefore, the researchers may have inadvertently led participants towards one answer over another.

For more information:
Concerned parents or youth who want to quit vaping may find support at the American Lung Association. Parents who want to learn how to talk to their children about vaping may benefit from the CDC’s guide. Additional resources can be found on our Addiction Resources page.