College drinking can have many harmful effects, including missed classes and lower grades, injuries, overdoses, and death. Previous research suggests that drinking games and college football game days may be particularly risky drinking contexts for college students. This week, The DRAM reviews a study by Dennis Hoyer & Christopher J. Corriea that compared college students’ drinking motives and alcohol consumption across three contexts: drinking games, tailgate parties, and in the stadium during football games.

What was the research question?
Among college students, how do drinking motives and alcohol consumption vary across the following contexts: (a) drinking games, (b) tailgate parties prior to home football games, and (c) in the stadium during home football games?

What did the researchers do?
Over 550 college students from a large public Southeastern university in the United States participated in the study. Participants completed the Drinking Motives Questionnaire-Revised (DMQ-R) to assess the following past-month drinking motives: coping (drinking to reduce negative emotions), enhancement (drinking to increase positive mood), conformity (drinking to avoid social rejection), and social (drinking to obtain positive social rewards). They also self-reported their engagement in and number of drinks consumed while (a) playing drinking games in the past month, (b) drinking at a tailgate party prior to a home football game as a student, and (c) drinking in the stadium during home football games as a student. The researchers then conducted hierarchical regression analyses to evaluate the associations between drinking motives and alcohol consumption in the three contexts.

What did they find?
Of the three contexts, drinking at a tailgate party had both the highest percent of engagement and the highest average number of drinks consumed (see Figure). Coping and enhancement motives were positively associated with the number of drinks consumed when tailgating. There was also a positive association between conformity motives and alcohol consumption while playing drinking games and in the stadium. 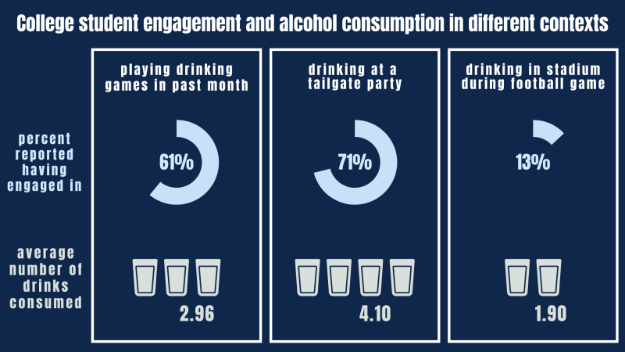 Why do these findings matter?
Most college students play drinking games and drink at tailgate parties, consuming an average of three to four drinks in these settings. Note that among women, drinking four drinks in one occasion is considered binge drinking. (The threshold is five drinks among men.) Conformity motives have been linked to riskier drinking game outcomes, putting students who drink to conform to their peers at increased risk for experiencing alcohol-related harms. Education and interventions should target popular drinking contexts, such as drinking games and tailgate parties, as well as address perceived drinking behavior norms.

Every study has limitations. What are the limitations in this study?
The study sample was primarily white females, so results may not be generalizable to other populations of college students. Drinking motives were measured for the past month, but this timing did not necessarily align with the occurrence of home football games. Thus, participants may have had other drinking motives related to tailgating and in-stadium drinking.

Posted at 09:05 AM in The Drinking Report for Addiction Medicine (DRAM) | Permalink