The DRAM, Vol. 19(1) – Give a drink, take a drink: Alcohol gifting behaviors and their association with drinking and cigarette use among Chinese heads of households

For many, the holiday season involves spending time with loved ones and maintaining social connections. In China, Confucian culture emphasizes gift giving as a way to maintain social bonds. For men, especially those in the higher classes, giving alcohol might be a way to show respect and strengthen bonds. A downside might be exposing more people to alcohol, including those who are trying to cut back or quit. Gaining a better understanding of alcohol gifting behavior may inform future interventions. This week, The DRAM reviews a study by Lu Zhang and colleagues that examined the prevalence and predictors of alcohol gifting, including associations with social capital among Chinese heads of households. They also studied relationships with smoking, which often happens in conjunction with drinking.

What was the research question?
Is giving/receiving alcohol as a gift associated with demographic factors, social capital, and current alcohol/cigarette consumption among Chinese heads of households?

What did the researchers do?
Researchers surveyed 1,512 heads of households (HHs, mostly married men) who had students attending either Guangdong or Shaanxi Province Chinese universities. The survey included questions regarding (1) socio-demographic characteristics, (2) social capital (e.g., social participation), (3) drinking behavior, (4) smoking behavior, and (5) alcohol gifting behavior. They used logistic regression analysis and obtained adjusted odds ratios to identify predictors of (1) giving or receiving alcohol and (2) being a current drinker or smoker.

What did they find?
Nearly half (43.5%) of respondents had received alcohol, and 29.9% had given alcohol, in the past year. Male HHs were more likely to give and receive alcohol compared to female HHs. Other factors associated with giving and receiving alcohol included (1) living in the northern region (i.e., Shaanxi Province) (2) being in the highest income bracket, compared to the lowest (3) being highly socially engaged, and (4) drinking daily or occasionally as compared to being a non-drinker. Next, the researchers looked in the other direction to explore characteristics that predicted being a current drinker or smoker. HHs who gave or received alcohol were at greater odds of being current drinkers. HHs who received alcohol were at greater odds of being current smokers, but those who gifted alcohol were at lower odds of being current smokers (see Figure). 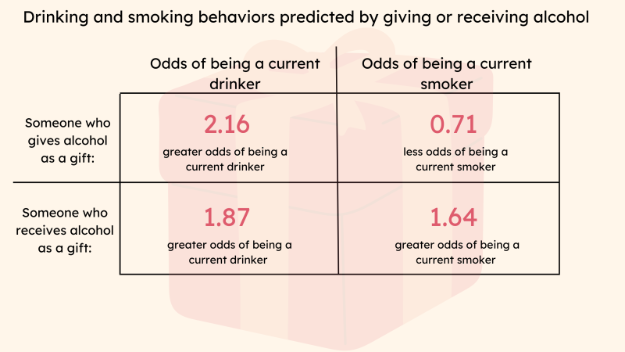 Figure. Odds of being a current drinker or smoker based on gifting behavior (i.e., giving or receiving alcohol as a gift). Click image to enlarge.

Why do these findings matter?
It’s always important to design policies and interventions that reflect local substance use culture. This study’s findings suggest that policies or interventions which weaken the link between gift-giving and drinking might be beneficial in reducing drinking or heavy drinking, especially for men who currently drink, have high social participation, have high incomes, and live around Shaanxi Province in the northern region of China. For example, it might be beneficial for alcohol ads to downplay gift-giving themes and imagery or promote ways to refuse alcohol as gifts without damaging social relations.

Every study has limitations. What are the limitations in this study?
This study’s results could have been impacted by researcher selection bias and participant response bias, potentially leading to a misrepresentation of the actual prevalence of alcohol gifting. Thus, these results can not be generalized to all of China.

Posted at 10:05 AM in The Drinking Report for Addiction Medicine (DRAM) | Permalink