Addiction & the Humanities, Vol. 8(5) – Sex, Drugs, and Rock ’n’ Roll: The portrayal of substance use in popular music

In the last issue of Addiction & the Humanities, we looked at the presence of alcohol in movies, and its relationship to teen drinking (Humanities 8(4)). In contrast to the episodic nature of movie going, music listening can occur during any part of a teenager’s day – and this can add up to much larger exposure to substance use imagery. Today’s Addiction & the Humanities looks at a study that examined references to alcohol, tobacco, and other drugs in popular music (Primack, Dalton, Carroll et al., 2008). Methods Researchers collected data from Billboard magazine’s lists of popular song titles (based... Read more →

Addiction & the Humanities, Vol. 8(4) - Watch what you drink: How alcohol placement in movies affects adolescent drinking

Unlike the tough stance the movie industry has on smoking, the portrayal of alcohol use in movies is all but unrestricted. Moreover, during recent years alcohol use has played a role as a central plot device in movies such as The Hangover. Although research has shown that alcohol marketing (Gordon, MacKintosh, & Moodie, 2010), peer alcohol use (Ferguson & Meehan, 2011), and possession of alcohol-branded items (Fisher, Miles, Austin et al., 2007) are associated with onset of alcohol use, it is unclear how strongly movie viewing habits factor into a youth’s risk matrix for early onset drinking - especially when... Read more →

Addiction & the Humanities, Vol. 8(3) - Has anyone seen Molly? Club music and ecstasy Celebrity DJ, Deadmau5 recently called out Madonna through Twitter for alluding to ecstasy during a music festival. The DJ contended that Madonna irresponsibly promoted ecstasy use by asking the crowd how many of them had “seen Molly” – a slang term for ecstasy. This incident made headlines around the world and strengthened the perceived association between club music and ecstasy. This week, Addiction & the Humanities reviews a study that examined the potential connection between music preferences and drug use behavior among visitors to European dance, club, and rock musical events (Van Havere, Vanderplasschen, Lammertyn, Broekaert, & Bellis, 2011). Methods... Read more →

Addiction and the Humanities, Vol. 8(2): Shameful addiction? A look at media portrayals of sex addiction.

Like gambling and shopping, some people engage in excessive sexual behavior to the extent that it disrupts their private, public, and professional lives. Although excessive sexual behavior has received less scientific attention than other behaviors, self-proclaimed sexual addiction by high-profile celebrities such as Michael Douglas, David Duchovny, and Tiger Woods (Serjeant, 2008; Klein, 2010), increases the general public’s awareness of this problem. Today, reality shows and movies grapple with excessive sexual behavior – but it is unclear whether these shows present a realistic depiction of its consequences. Today’s BASIS explores recent media portrayals of sex addiction through two case studies:... Read more →

Addiction & the Humanities, Vol. 8(1): DARE to be Ineffective? A look at Drug Education Programs in Schools

During 1983, Police Chief Daryl Gates created the Drug Abuse Resistance Education, or DARE program, which more than 80% of school districts in the United States use for educating students about resisting drug use. Every year, more than 26 million students participate in a DARE course (DARE, 2009). The DARE program utilizes uniformed police officers to teach students to make decisions to resist drug use (DARE, 2009). In addition to classes, DARE incorporates interactive education and activities like dances and socials and culminates in a graduation ceremony (DARE, 2009). DARE is very popular among students and parents. A Canadian study... Read more →

Addictive behavior is an ongoing public health problem. Fortunately, there are many possible pathways to health and recovery – including somatic healthcare. However, practitioners’ interest in specializing in addiction often drops as their medical training progresses (Ritson, 1991). This circumstance prompts a reconsideration of the teaching methods used to educate medical students about addiction. In this edition of Addiction & the Humanities, we present a paper that discusses potential benefits of using movies to educate medical students regarding drug addiction, and, hopefully, to facilitate students’ interest in addiction treatment (Cape, 2009). Cape (2009) suggests that using movies to familiarize medical... Read more →

During June of this year, Time Magazine and the British newspaper The Independent published stories about a disturbing new trend in drug use: the steady rise in Russia of “krokodil” consumption (Shuster, 2011; Walker, 2011). Krokodil (or crocodile in English) is “homemade” desomorphine, referred to as a very powerful synthetic opiate that is significantly less expensive than heroin. Its name comes from the scaly appearance of users’ skin. This cheap, homemade alternative to heroin has shocking effects on users’ minds and bodies. The story about krokodil was picked up in several blogs, and people began posting graphic videos on YouTube... Read more →

Addiction & the Humanities, Vol. 7(8): Are We “Hooked”? The Success of Addiction Memoirs 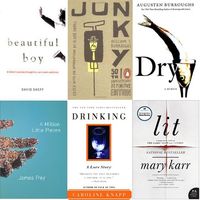 With the number of available addiction memoirs, one would expect that the last thing the public wants is yet another story about addiction and recovery. However, the genre of addiction memoirs has thrived for a very long time. Writers and non-writers alike have documented their battles with drug addiction in books that have become popular with readers who are in recovery, as well as readers who simply are curious about the issue. Despite their popularity, many observers continue to criticize addiction memoirs as being everything from unnecessary to dangerous. Readers’ reviews on websites like Amazon.com and GoodReads.com include these reproaches.... Read more →

Addiction & the Humanities, Vol. 7(7) - What will it take to WoW them? Does gaming addiction exist?

With more than 11 million subscribers, World of Warcraft (WoW) is a very popular massively multiplayer online role-playing game (MMORPG) (Helgeson, 2011). Subscribers pay a fee to participate in an online environment called Azeroth where characters advance through levels by gaining experience points for performing quests (e.g., killing enemies, delivering items, raiding). Although it appears that most subscribers play WoW without any significant adverse consequences, for some, playing becomes excessive. Reports have attributed several deaths to excessive video game playing and online game playing. For instance, a New Mexico woman recently was sentenced to a prison term after her daughter... Read more → 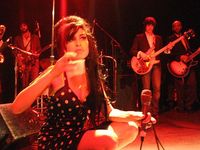 In an ongoing series, we highlight celebrity substance abuse and its media portrayal. A previous Addiction and the Humanities investigated how the media used Michael Jackson’s death to highlight the broader issues associated with prescription drug abuse and its consequences. Today’s BASIS examines the public response to the death of Amy Winehouse, English singer-songwriter and jazz musician. Amy Winehouse was found dead Saturday, July 23rd, in her London flat. She was only 27 years old. An autopsy proved inconclusive, and it will take two to four weeks before toxicology test results are available (Forbes, 2011). However, the media already has... Read more →

« Previous | Next »
The BASIS is a product of the Division on Addiction, Cambridge Health Alliance, a Harvard Medical School teaching hospital. The Division is an entirely self-funded academic organization that relies on grants, contracts, and gifts in order to produce The BASIS and our other high-quality work.