Many people consider addiction to be a problem of personal weakness, initiated for self-gratification and continued because of an unwillingness or lack of sufficient willpower to stop. However, within the medical and scientific communities, the notion that pleasure-seeking exclusively drives addiction has fallen by the wayside. Clinicians and scientists alike now think that many people engage in potentially addictive activities to escape discomfort — both physical and emotional. People typically engage in psychoactive experiences to feel good and to feel better. The roots of addiction reside in activities associated with sensation seeking and self-medication. People allude to addiction in everyday conversation, casually referring to themselves as “chocolate addicts” or “workaholics.” However, addiction is not a term clinicians take lightly. You might be surprised to learn that until the current Diagnostic and Statistical Manual of Mental Disorders, 5th Edition (DSM-5), the term addiction did not appear in any version of the American Psychiatric Association’s diagnostic manual, the reference book that physicians and psychotherapists use to identify and classify mental health disorders. In this most recent edition, addiction is included as a category and contains both substance use disorders and non-substance use disorders, such as alcohol use disorder and gambling disorder, respectively.

A revised view of addiction

It might seem strange to group gambling problems in the same category as a problem with drugs or alcohol. But addiction experts are beginning to move away from the notion that there are multiple addictions, each tied to a specific substance or activity. Rather, the Syndrome Model of Addiction suggests that there is one addiction that is associated with multiple expressions. An object of addiction can be almost anything — a drug or drug-free activity. For addiction to develop, the drug or activity must shift a person’s subjective experience in a desirable direction — feeling good or feeling better. 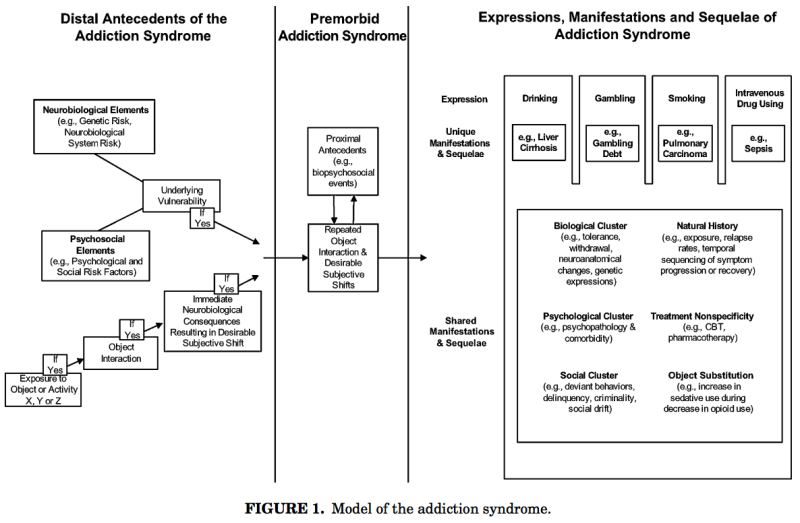 Several scientific advances have shaped our contemporary understanding of this common and complex problem. For example, brain-imaging technologies have revealed that our brains respond similarly to different pleasurable experiences, whether derived from ingesting psychoactive substances, such as alcohol and other drugs, or engaging in behaviors, such as gambling, shopping, and sex. Genetic research has revealed that some people are predisposed to addiction, but not to a specific type of addiction. These findings suggest that the object of addiction (that is, the specific substance or behavior) is less important than previously believed. Rather, the new thinking reflects the belief that addiction is functional: it serves while it destroys. Addiction is a relationship between a person and an object or activity. With addiction, the object or activity becomes increasingly more important while previously important activities become less important. Ultimately, addiction is about the complex struggle between acting on impulse and resisting that impulse. When this struggle is causing suffering related to health, family, work, and other activities of everyday life, addiction might be involved.

There are many routes for recovery, and the road may take time

Addiction is a chronic and often relapsing disorder. It is often preceded by other emotional problems. Nevertheless, people can and do recover from addiction, often on their own. If not on their own, people can recover with the help of their social network or a treatment provider. Usually, recovery from addiction requires many attempts. This can lead to feelings of frustration and helplessness. Smoking is often considered one of the most difficult expressions of addiction to change. Yet, the vast majority of smokers who stopped quit on their own! Others stopped smoking with the help of professional treatment. It is important to remember that the process of overcoming an addiction often requires many attempts. Each attempt provides an important learning opportunity that changes experience and, despite the difficulties, moves recovering people closer to their objectives. There are many pathways into addiction and many routes to recovery. Think about recovery from addiction as a five-year process that will have its ups and downs; after about five years, life can and will be very different. As life becomes more worth living, addiction loses its influence.